Lovely holiday apartments, and a summerhouse, by one of the best sandy beaches in Europe. Beautiful natural surroundings, child friendly beach with white sand as far as the eye can see. Click for price and availability

Dueodde Beach – one of the best beaches in Europe
Stay in a holiday apartment or in the summerhouse at Dueodde Badehotel, for a holiday you will never forget. Dueodde Beach is one of the most famous beaches on Bornholm, and has been named as one of the best beaches in Europe by several foreign media outlets. You can look forward to soft, white sand as far as the eye can see. The sand at Dueodde is so fine that, in the old days, it was exported to England and France, to be used in hourglasses. It has been said that even the Emperor Napoleon had an hourglass with sand from Dueodde. Dueodde Beach is the largest beach on Bornholm, and it never feels crowded, not even on the hottest of summer days. Here you will have plenty of room for fun and games. Dueodde Beach is very child friendly, as the beach is practically clear of stones and rocks, and has shallow waters. Stay at Dueodde Badehotel for a lovely beach holiday on Bornholm.

Dueodde’s very own 18 hole golf course is just 5 kilometres away from Dueodde Badehotel. The golf course stretches across a very interesting area, and its many lakes make it appear as if it were a seaside course.

Towering viewpoints
Not far from your holiday apartment at Dueodde Badehotel, you will find Dueodde Lighthouse. Do not miss out on a trip to the lighthouse, which offers a fantastic view. The 198 steps to the top are all worth it. From the lighthouse, you will have a view of the Baltic Sea and most of southern Bornholm.

A second tower, near Dueodde and your holiday apartment at Dueodde Badehotel, is the Bornholmer-Tower. The Bornholmer-Tower was originally the most important listening and radar outpost for NATO, during the cold war. With the radars, it was possible to detect signals all the way from Russia. For example, the radar at Dueodde had already detected communication between the Russian troops, as they were preparing to invade Hungary in 1956. When the cold war was over, NATO lost interest in the outpost, and today, the Bornholmer-Tower has been turned into a Cold War Museum, offering many interesting stories of the part Bornholm, and Dueodde, played during the cold war. At the museum, you can see an original Russian MiG-15 fighter plane. Back in 1953, a polish pilot ”borrowed” a plane just like it, and used it to escape to Bornholm. The Bornholmer-Tower has 400 steps to the top; so luckily, you are not far from the comforts of your holiday apartment at Dueodde Badehotel, where you can relax after your visit. – Or you could just take the elevator. For more information about the Bornholmer-Tower, visit their website: http://bornholmertaarnet.dk/forside_uk.html

Secret operations in the sand
The area around your holiday apartment at Dueodde Badehotel offers many interesting stories. During the cold war, Russia had plans to attack Bornholm, via the beaches at Dueodde, had an armed conflict with NATO become a reality. There have been many persistent rumours of landing drills by Russian Special Forces, conducted during the night on Dueodde Beach in the 1970s. It was believed that the Special Forces were performing landing drills from submarines. Though the rumours were never confirmed, it was hard to dismiss them completely, as various different Russian military articles were found in the area around this time, for example a Russian diving mask. Maybe you want to go out exploring on your own, from your holiday apartment at Dueodde Badehotel.

Historical experiences
Not far from your holiday apartment at Dueodde Badehotel, you will find several traces from history. During World War II, Dueodde also played a part. Following the German occupation of Bornholm in 1940, Hitler began the construction of two large emplacements at Dueodde. These emplacements were, along with the emplacements on the German coast, to block the Russian seaways south of Bornholm. The emplacements were never put to use, but still exist, bearing witness to a thrilling and scary time for Dueodde. Today, the wide, white sandy beaches only bring memories of fantastic summer days and holiday vibes.

Holiday, ice cream, and smoked herring
Just 5 kilometres from Dueodde and your holiday apartment at Dueodde Badehotel, lies the little fishing village Snogebæk. Snogebæk has been designed as an island harbour. In Snogebæk, you will find a chocolatier, craft arts, and an ice cream factory, which only uses local dairy products in its ice cream. Snogebæk also has a smokehouse, where you can sample the Bornholm speciality, smoked herring, and return to your holiday apartment at Dueodde Badehotel, happy and full, following a day of holiday adventures.

If you fancy a pizza, get one from the famous ”Sørens Værtshus”, where two old fisherman’s shacks have been rebuilt to house a cafe/bar. In the evening you can listen to live music, and Sørens Værtshus invites the whole family to have a good time. An old rowing boat hangs from the ceiling, and if you want to climb into it, go ahead!

Book now
Book your holiday in Dueodde by entering your preferred arrival date in the box at the top of this page, send us an email at info@teambornholm.dk, or call us now on (0045) 56 95 85 66 - We will provide you with inspiration and advice for a lovely holiday on Bornholm. 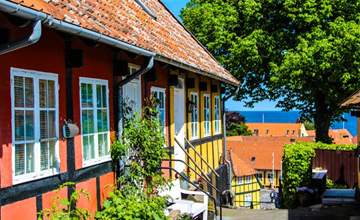 Call or email us now for great advice for a wonderful holiday on Bornholm.

We are ready by the phone 7 days a week.

Didn't find what you were looking for?

You will get the best price
With us, you are booking directly at the holiday location - ensuring you the best price. Our price always includes cleaning, electricity, and free cancellation insurance. No hidden fees!

Optional arrival dary
At almost all of our holiday locations, you have the option of arriving and departing any day of the week, and as such, you do not need to book for whole weeks.